There are only 24 hours in the day. But even though everyone gets the same number of hours each day to do meaningful work, some people are productivity machines and do so much more than others. Being extra productive will go a long way toward boosting your career and fast-tracking you for a manager’s position. If you’re already a manager, more productivity almost always directly results in more profits for your company.

Let’s take a look at the top five productivity hacks you can use to get more out of your day.

Firstly: don’t ever try to multitask, no matter how many self-help books or productivity manuals say otherwise. Similarly, don’t believe anyone who tells them that they’re masters at multitasking. The biological reality is that the human brain can only focus on a single task at a time, even if your subconscious mind is still subtly working on or thinking about other things in the background. Your focus – the part of your mind that you can direct – is a single-task tool. Period.

In fact, trying to multitask can actually lower your productivity by spreading your attention to thin and resulting in several rapid-fire mistakes. If you’re constantly trying to multitask, you have a lower likelihood of doing a great job on the most important task at hand. This may require you to go back and redo your work several times over.

It’s a much better idea to be productive by only focusing on a single job at a time. This isn’t to say that you can’t focus on multiple things per hour or time block, of course. But consciously focus your efforts toward doing one thing and you’ll see much better results.

Another great idea is to set several small deadlines instead of piling all your work on to a single deadline – say, at the end of your workday. This doubles as an excellent way to beat procrastination since the human mind loves to meet deadlines. Trust us, your brain will allocate as much energy as possible to complete tasks before time is up in the majority of cases.

This will allow your brain to focus properly and prioritize jobs one after another. As an added bonus, your brain will feel more productive and more rewarded each time you complete a task before the deadline is done. If you’re done significantly ahead of schedule, you can give yourself a modest break to breathe and appreciate your productivity. 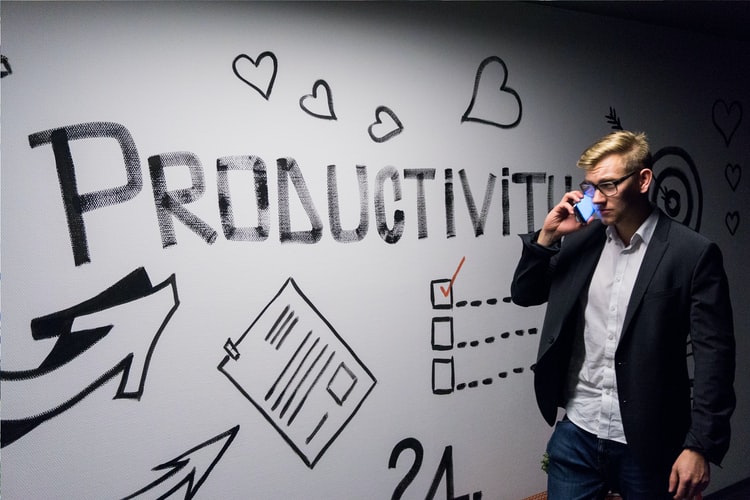 This is related, but distinct from the above two tips. You should always try to work in bursts instead of grinding through a too-long working session. There’s plenty of evidence to show that we are much more productive if we try to get as much work done in, say, a single hour then we try to consciously get done over five hours.

Again, the human brain isn’t particularly good at maintaining attention over long stretches of time. It is good at buckling down and focusing on a task for a short period of time. If you can train your brain to do this over and over, while giving yourself breaks in between, you’ll be a lot more productive over the long-term.

For a more specific example, consider working at a software company and having to write some code multiple times throughout the day. Break down your code-writing tasks into their component pieces, then set small deadlines for you to meet throughout the day. Whenever it’s time to start working on a particular part of the overall job, buckle down and get through it over the course of a single hour. Do as much work as you can without taking a break.

Once that hour is up, let yourself relax. Short, intense periods of productivity are a hallmark of successful CEOs and hard workers everywhere. It’s also how a lot of the most skilled professionals learn their trades – for instance, it’s better to consciously practice playing piano for a single hour every day than it is to idly spend time pressing keys for four hours every day.

We’ve said above already, but here it is again for emphasis: always give yourself regular breaks! You might think that you’ll be more productive if you try to work 15 hours a day without stopping for a breather, but you’d be wrong.

You absolutely need a little bit of time off to give your brain a moment to recharge and your body some time to rest. Working and being extremely productive does drain you of energy and mental fortitude. You need to be able to recharge both if you want to maintain high productivity over the week, month, or business quarter.

It’s often a good idea to take a small break after every intense working period described above. The break doesn’t even have to be too long – rest periods of 10 or 15 minutes are usually enough to get your mind back into a working position.

KEEP DISTRACTING THINGS OUT OF SIGHT, OUT OF MIND

Lastly, just keep all the distracting things at your desk or around your workplace out of sight so you aren’t tempted to waste time with them. For most of us, this probably means locking our smartphones away or using productivity apps that prevent us from wasting time on the Internet or social media.

It may also be a good idea to use computer apps that do the same thing. Removing the temptation to surf YouTube will end up helping your productivity since you’ll default to working instead of being bored.